These are CO2 powered, for pre-charge pistols go to the Outlaw Pistols page.

These steel breeches have the scope mount dovetail milled on the top side, conforming with industry standards of the scope mount form.  Most pistol scopes, used on airguns, are intended for firearms.  The scope mounting is usually right above the hand as a standard.  This allows the manufacturers to use the distance of an arm's length as the distance that the scope view would be full and in focus, which is summed up as the proper eye relief.   For mounting a pistol scope and maintaining proper eye relief, the forward scope ring mounts forward of the loading port.  With the scope rings spaced, as in the picture, loading the gun is unobstructed.    The gun is shown in order to show perspective.

The same unobstructed loading and proper eye relief can also be had by using a better grade red dot sight.

Grips by R. B. Grips

A problem arises when using the inexpensive red dot sight.  When mounted on the rear dovetail it masks the loading port.

This is the reason that Crosman makes their breech very long, ahead of the barrel mounting.  The space in front of the loading port is there so you can use the red dot that Crosman sells on the Crosman gun.

This is to show how loading would be unobstructed by mounting the red dot forward.

The CO2 pistol breech with the left side bolt with dovetail.  All types of the breeches are sold out.  A total of 850 were made.

Steel replacement breech  Available with either scope grooves or milled for open sights.  Bolt handle on the left or right side (you use the existing bolt from your pistol.)  Over 500 of these breeches have been made so far.  Hot salt bath blued, using the same process as Ruger, Winchester, Browning & other well known firearms manufacturers (not cold blued or painted).      Changing to the steel breech has a positive effect on accuracy.  The original plastic breech just locates the barrel and the barrel band is what holds it in place.  So every time you fire, you get a little flex, disturbing the point of impact.  The Crosman barrel starts as 7/16 diameter stock, which is .4375.  It's rifled and then run through a grinder to prepare the surface before bluing.  Its finished diameter is .435, so I make the barrel recess in the breech .435, others make it to the standard 7/16 diameter which leaves the barrel loose and then they try to make up for it by using a lot of set screws.  This breech barrel mounting is snug in the .435 recess and is 3/4" deep, secured by a set screw (in the best place it can be) directly above the transfer port.  This allows the barrel to be free floated through the barrel band.  You can leave the barrel band on, but you don't have to use the top set screw.  I supply the .050 hex key needed to remove the front hold down screw.

This last of the steel breeches are sold out.  To make the breeches I need to purchase 500 pounds of steel in one lot, in order to get the type of steel that I want.  And these breeches will use up the last of the 500 lbs I purchased earlier.  500 lbs is 32, twelve foot long bars; 37 breeches are made from each bar.  So each purchase of steel makes 1180 plus breeches.    When I first made the breeches, I didn't number them.  I started part way into making them marking them on the under side of the breech.  The last breech was #850.

SOLD OUT .25 cal conversion for Crosman CO2 pistols.  Consists of a steel breech, bolt and rifled barrel.  The conversion is made with the bolt on the left side and is available with either scope dovetail or milled for open sights.  This is an either/or proposition because to mill the breech for the open sights removes about an inch of area which would normally be used for the scope dovetail, making an open sight breech difficult to mount a scope on.  Performance wise, with this conversion's larger bore and 10" long barrel it improves the efficiency of the pistol.  Whatever velocity your 2240 was capable of with the .22 cal, 14.7gr pellet it will do approximately the same with the RWS/Diana .25 cal., 20gr pellet.  The rifling was perfected using the RWS/Diana pellet, which I recommend using.     I no longer sell a complete pistol.   You save money by installing it yourself.  You only need to operate a hex wrench and a screw driver.  I supply the .050 hex key, transfer port seal and screws with each conversion set.

The features of this conversion:   The barrel is threaded into the breech, as rigid as you can get.    Transfer port is in the  breech, not in the barrel.   Transfer port is counter bored for no leakage between the action      and the breech.   Steel bolt of a diameter larger than the pellet.  The standard 1/4"      diameter bolt is smaller than the pellet's skirt diameter.   The bolt contacts the pellet's skirt, it does not use a probe that      obstructs the airflow.   The front hold down screw is a stainless steel, phillips flat head,      replacing the low head screw that Crosman uses.   The dovetail for the scope is Industry Standard specifications.   Breeches are numbered; any airgun of value should have a serial      number.  144 round breech sets were made and 327 square breech      sets were made.

The Crosman 2240, 2250, and 2260 lineup of .22 caliber CO2 powered airguns is reminiscent of the glory days of Crosman.  Powerful, light, accurate, and fun all accurately describe these modern day seltzer guns.  There’s quite a bit of steel and brass in these guns, but the weak link in the chain is the two-piece plastic receiver.

On the left is a stock Crosman 2240.  On the right is a customized 2240 with a steel breech set up for iron sights and a left handed bolt.

One of the first things a serious Crosman enthusiast does is replace the plastic breech/receiver with one made of metal.  Of all the offerings on the market, my favorite is the blued steel breech by Dennis Quackenbush.  The breech will add about 3 oz extra weight to your airgun, or about 2 oz more than the lightest aluminum replacement breech on the market.

Installing the replacement breech is easy.  Loosen the barrel band and slide it forward.  Remove the small screw located in the loading trough with the Allen wrench provided in your breech purchase and remove the screw through the rear sight with a screwdriver.  Pull forward on the barrel after removal of the upper unit and it will pop out of the factory breech.  Pull down on the bolt handle and the factory breech will pop into two pieces, freeing the bolt.  To install the steel breech, reverse the process, but use the replacement screws provided in your breech purchase rather than the factory screws.  The small setscrew provided with the purchase of your breech is used to secure the barrel.  Tighten it snugly after you have the new breech and barrel installed on the airgun.

For step-by-step instructions with photos on how to take apart your 2240, you can refer to a photo tutorial I wrote for IHMSA Air.  You’ll need to fill in a form and get registered at Yahoo! Groups and then join the IHMSA group before you can view the photos.  It’s easy and should take no more than 5 minutes even if you type really slowly. Click the following link, go to “photos” in the menu on the left side of the page and look in the directory marked “2240 disassembly” (directory #2).

Sure, the new breech looks cool, but what else does it do for you?  Well, for one thing, the most popular variant produced by Dennis is grooved for scope mounting.  A standard airgun scope mount clamps on the grooves and you no longer have to fiddle with Crosman’s “intermount” system to mount a scope on any of the 22XX guns. You can get the breech designed to accept the factory rear sight as well.  There are no “combo” breeches that have both iron and scope mounting options, but you can do what I did and get both! 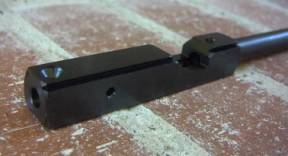 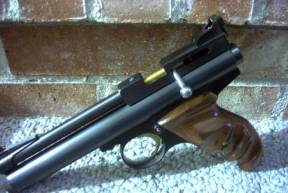 Here’s a close up image of the steel breech with factory iron sights.

You no longer need a barrel band on barrels up to and including the 14.5” barreled 2250.  You can mount a 2260 (24 inch) barrel without a band, but to me it just feels too “whippy”. I like to slide a barrel band on when I use the longest Crosman barrels.  Folks who have modified their 22XX guns to ingest large doses of bulk CO2 or High Pressure Air have found that the factory breech simply isn’t up to the task of handling the extra pressure and/or gas volume.  A steel breech solves that problem quite elegantly.

It’s easy to install.  It holds the barrel much more securely than the factory two-piece plastic breech. The blued steel seamlessly integrates with the looks of the rest of the gun. You can mount a scope (with the right breech) without the funky “intermounts”.  I have at least one example of each of the major aftermarket metal breeches.  I’ve got ten DAQ steel breeches.  If you are going to replace that plastic breech with one made of metal, blued steel is the way to go.